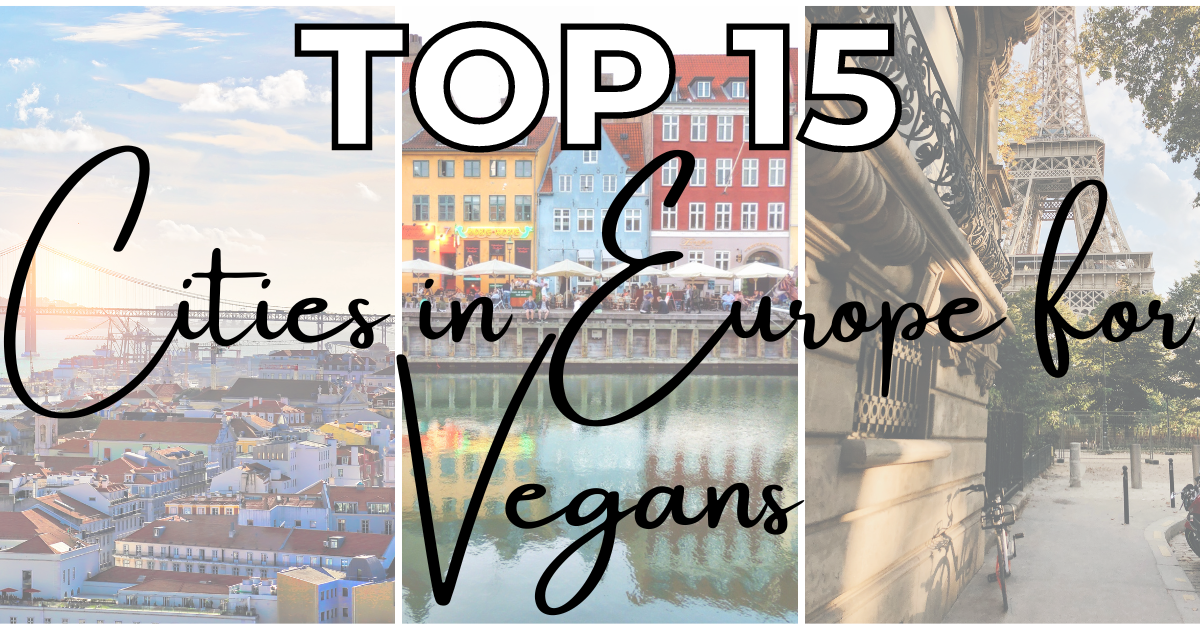 Traveling as a vegan can be quite difficult in some parts of the world, especially those who have practically made meat part of their national identity like much of Europe. But, European cities are starting to change in part because of the growing popularity of veganism around the world. So here are the top 15 cities in Europe for Vegans. May this list continue growing for many years to come.

Thanks to London being the major international melting pot that it is you can find just about anything you want there. So for that reason, I wanted to get it out of the way first thing. London has around 20,000 restaurants, more than 200 of them are vegan while nearly 5,000 offer vegan options.

Paris, and France generally might not be the first place you think of when you think of vegan food thanks to their love of cheese and butter but Paris, much like London is home to a very diverse group of people. Paris has nearly a hundred vegan restaurants with 1,700 offer vegan options.

Berlin was for a very long time called the Vegan Capitol of Europe and in fact, Germany is one of the best countries in the world for vegans to find food that suits their tastes. This isn’t the last of Germany on this list either. Berlin has more than 100 vegan restaurants while 1,350 offer vegan options.

Milan may be best known for one of the most environmentally harmful industries there is, but the food scene doesn’t follow in those footsteps. Nearly 1,300 of the 8,700 restaurants in the city offer vegan options. Only 35 restaurants are vegan but that number is growing every year.

Prague is a fantastic follow-up from Warsaw if only to show how amazing Warsaw really is. Prague has 6,200 restaurants, nearly double the number of Warsaw but it only has 58 dedicated vegan restaurants. While they may not be as impressive as Warsaw, Prague is still doing pretty alright compared to most of Europe. Just in case you’re curious there are 551 restaurants in Prague that offer vegan options.

I might be a little bit biased when it comes to Cologne, it is my favorite city in Europe after all. But it is a small city that packs a big punch when it comes to vegan eating. 32 of its 2,400 restaurants are vegan and 290 restaurants offer vegan options. I’ve got a few different articles on Cologne for you to enjoy if it’s somewhere you want to check out, which I highly recommend.

Scotland may be best known internationally for its haggis, which I have yet to be brave enough to try, but in recent years it has been moving away from the meat lovers paradise that it was so famous for. Glasgow in particular is taking the lead with 28 dedicated vegan restaurants and 603 offering vegan options out of the 2,400 restaurants in the city.

With nearly 80 dedicated vegan restaurants Amsterdam is city where vegans can thrive. They even have vegan food trucks, which is a pretty rare thing in Europe sadly. Out of their 4,500 restaurants nearly 1,000 of them offer vegan options, making Amsterdam a fantastic place to visit if you’re traveling with meat eaters.

Madrid is a fantastic city to head to if you love vegan burgers. But, compared to other cities on this list it is lagging a bit behind. It has 52 dedicated vegan restaurants, which doesn’t sound too bad until you find out there are nearly 13,000 restaurants in the city. Of those 13,000, almost 1,300 offer vegan options. Most of them aren’t Spanish though sadly as a lot of Spanish favorites aren’t vegan.

Lisbon is doing a little bit better than Madrid when it comes to vegan dining. Out of 5,600 restaurants 60 are vegan with 700 offering vegan options. That being said, they do have a lot of variety in their vegan restaurants, including local food.

Vienna’s vegan scene is another one of those that is dominated by foreign food which, there’s nothing wrong with a good curry, but if you’re traveling you usually want to eat as the locals do. In Vienna you’ll have almost 50 vegan restaurants to pick from with 730 restaurants offering vegan options. The restaurants are out there, but it’s unlikely you’ll be running into them randomly as you wander past as a tourist. If you don’t mind a little more work though Vienna is a great option.

Though Copenhagen has a fairly small restaurant scene, only 2,700 restaurants in total, it does have something rather rare in Europe, a vegan chain restaurant. Eden Jaxx is the name and you can find several of them throughout the city. According to their website, they will also deliver their vegan burgers. So if you don’t feel like leaving your hotel room to eat there’s an option for you.

If you’re headed out into the alps for some skiing it might be worth your time making a stop in Turin which may only have 20 vegan restaurants out of the 4,000 in the city, but they do have vegan gelato and I don’t know anyone who can resist gelato, myself included. In fact quite a few Italian restaurants there offer vegan options, so you can enjoy the best of both worlds.

This list was compiled using Happy Cow, a website similar to Yelp, but specifically for vegans, vegetarians, and restaurants with vegan options. They are not a sponsor #notasponsor but it’d be pretty cool if they were. I also used TripAdvisor (also #notasponsor) to get an idea of how many restaurants are in each city. I do hope that one day Dublin, the city I now call home can feature on this list too.